Do you have a favourite moon song? If I were to pick one I’d have to say it’s Van Morrison’s Moondance. It could be the melody—how it makes you want to sway. It could be Van’s smooth voice—how you have to sing along. Or it could be when I first heard it. The song was released in 1970—I was twelve years old and obsessed with an inappropriate guy. 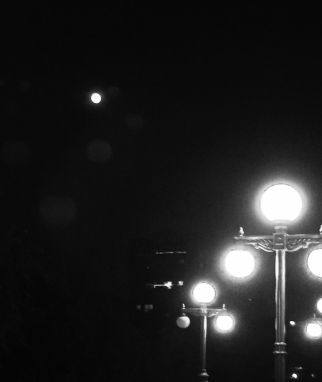 Just like listening to moon songs, there’s something about watching the moon itself and, if you can’t get out there in the middle of the night, looking at photos of it.

On October 15, 2016 there was a lot of talk about the Hunter’s Moon being a supermoon (when the earth is closest to the moon). So, I decided to get out and take some photos. Being mid-October in Winnipeg it was not surprising that it was chilly, my fingers were stiff with cold as I snapped photos that night—my inexpensive camera means fooling around for a long time to focus on distant objects. I was in a parking lot that I often use when taking moon photos. There’s a wide open view of the eastern sky where the moon rises. Also, there are train tracks, a transit station, and a busy street. This all provides for other interesting photo opportunities beyond the moon. 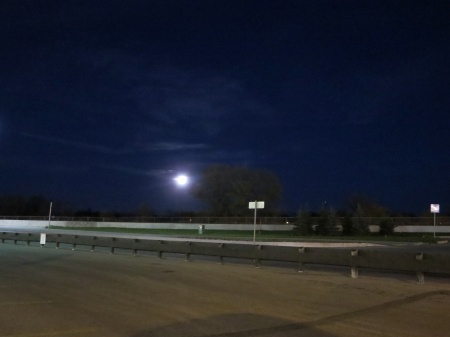 The leaves were still on branches and reminded me of trees much more exotic than those which grow along the rail lines in Winnipeg.

Though silhouettes can be eerie let’s stay with the romantic—maybe a couple walking hand in hand under the moon. They also bring to mind rum advertisements and vacations on tropical islands. The fact that trains were travelling by adds to the mystique, conjuring old movies that depict clandestine affairs or breathless honeymoons.

And moon memories seem to make everything good. Exhaust fumes are forgotten as cars turn into delicate streaks of light. The metal-on-metal screeching of train on track blends into soft earth-toned blurs. And cold is not important once half-frozen fingers melt into pockets. The memories of all that dancing about under the moon is what sticks.