I used to like squirrels. I wasn’t crazy about them, but they were okay. Until the Patio Incident happened (if you want to read the Patio Incident Story it’s down below the photos). After that, I couldn’t shake the hate, but recently I’ve been trying to give squirrels another chance.

A couple of weeks ago, on a warm winter day, we were wandering the Manitoba Legislative Building grounds and saw many small red squirrels frolicking in the snow. Over the years, I have seen the reds, that I believe were introduced here by the British long ago, bullying the larger grey squirrels that are native to Manitoba, so I had always preferred the grey. That was before the Patio Incident involving a large old grey, so it’s easier for me to start getting the love back with the small red ones.

Here are shots, in both colour and silver tone, of a squirrel zipping about on the planter along the steps, then making a leap for it. 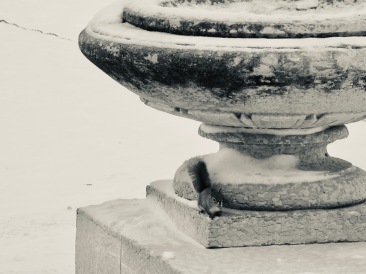 We saw the squirrel below, having fun along the river bank, as we walked home over the Osborne Bridge. What’s not to love—to like, maybe? 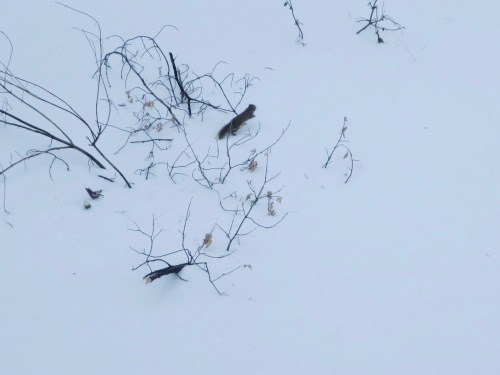 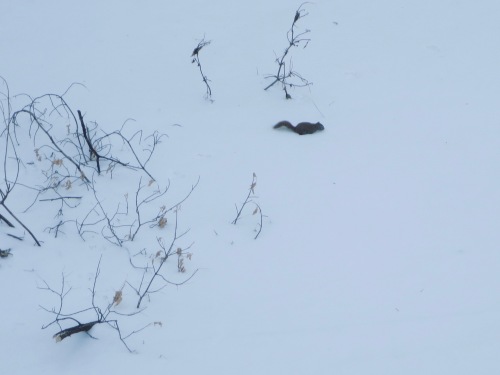 Below is a photo of a small red squirrel on a hydro pole, taken shortly after the Patio Incident, and below it is the story itself. I have no photos of the incident, so you’ll just have to believe me.

He was taunting me like he always did. He sat there, in front of the window, for a moment—I could see him smiling, then laughing. He was laughing at me. As I ran for the patio, he scurried across to the vine planter and dug in before I could get out the sliding door. Soil and bits of vine leaves flew across the paving stones. That son of a bitch! The big old scruffy-tailed grey squirrel, my nemesis, whooshed past me, squeezed under the fence and was gone. I could hear him snickering on the other side.

It was about ten years ago, and I had been so excited about having a bit of a patio garden, when I moved into a ground floor apartment after having lived in a second-floor condo for a number of years. I planned my design. I bought planters, flowers, vines, soil, a watering can, and some garden tools. I put it all together and watched it grow.

Then, one sunny morning, I stepped outside, holding my first cup of tea of the day, only to find each planter had been savaged and the patio was covered with soil. What horrible creature could have done it? Just then a squirrel scrambled past me and out under the fence.

This kept happening for weeks. I tossed natural repellants, and home remedies I read about on the internet, in and around the planters. They only made the squirrel more brave. He now entered the patio even as I sat there on a lawn chair.

I wrapped chicken coop wire around each planter. He was stumped for a couple of days, but then came back with a vengeance, probably after consulting with the criminal squirrels on the other side of the building where someone who lived on an upper floor was stupidly leaving the peanut treats. The peanuts that the big grey squirrel was now burying in my planters after he ripped out my marigolds.

I could no longer enjoy the patio. I even started keeping the curtains closed, so I didn’t have to see him grinning at me through the window.

A few weeks into this I was driving along a busy street, a few blocks away from my house, when a big grey squirrel dashed out in front of my car. I could not stop in time. The squirrel was a goner. I had tried to stop, hadn’t I? I looked at the dead squirrel’s full bushy tail, so unlike my nemesis’  scraggly one. I really had tried, I’m not a murderer. I could not ignore the guilt though.

Shortly after that, I cleared the planters from the patio and gave away the gardening tools. Every once in a while I would see the scruffy-tail bastard across the parking lot, no doubt driving some other would-be gardener to distraction.