I know a lot of people who really love cats. I’m not obsessed with cats, but I do like them and love certain ones. And…shhhhhh…I now like them better than dogs, though I still like big mutt dogs.

When I was growing up, out in the country, a few dogs lived with us at different times. Actually they lived outside in a doghouse that was covered with straw during the winter. They were country dogs. I didn’t really know many cats at that time and the few I did know we’re other people’s barn cats.

When I moved to the city, I missed having an animal nearby, but I felt that the dogs I preferred should live outside and certainly not in an apartment. So, eventually, my boyfriend and I went to the Humane Society and got a cat. Then we got a kitten, so the cat wouldn’t be lonely when we were at work or school. We moved. A stray showed up and moved in. Then another. So we had four. I soon realized I preferred cats to dogs. 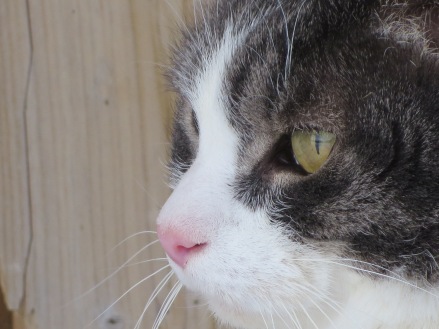 After the last of those cats passed on, my allergist told me not to get anymore. I then moved to an apartment where pets weren’t allowed and it made sense not to have one. Also, when the last one died, and…shhhhhh…she was my all-time favourite, my heart was broken and I decided I couldn’t go through that pain again.

Below is an old Polaroid snap of my all-time favourite, Hagy. She, on her own with no training, learned how to use the human toilet. She never ever messed up on the seat, either. Now you can see why she was so loved. 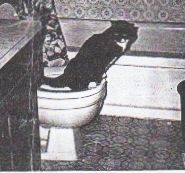 So, after that, I decided just to enjoy visiting and taking photos of other people’s cats. 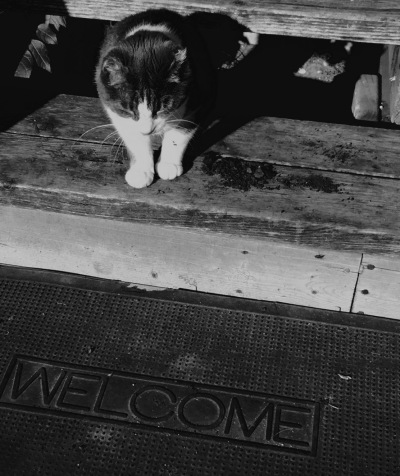 That’s Cloudy the Earless Cat in the feature photo at the top of this post (also near the welcome mat above and in the silly shot below), out at my dad’s house in rural Manitoba. Dad found her hiding in his unheated garage one super cold January day. We knew she’d been out in the elements for some time because her ears were missing, frozen off. She wouldn’t come out at first, so Mom found a tattered sweater and they put it, along with some food, in the garage. In a few days, Cloudy was their cat. 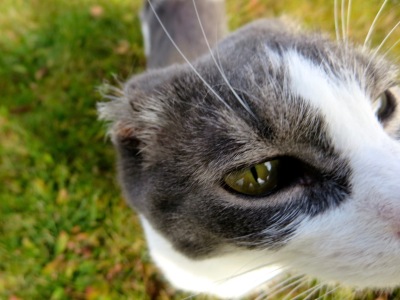 My dad, who had never liked cats, became very attached to her, especially after Mom had to move into a care home in town. Here’s Dad strolling, while Cloudy wanders like a snake behind him, along the road in front of their house. It’s one of my favourite shots. Dad was not big on holding or fussing over Cloudy, but she followed him everywhere. She passed on a few years ago and I know he still misses her. 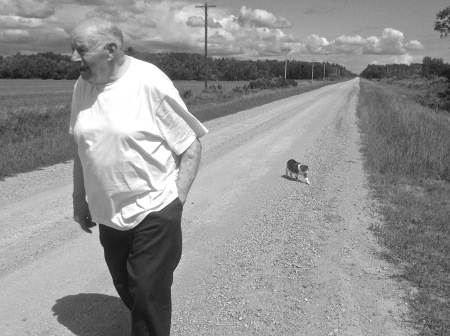 One of my best friends, actually my ex-husband, has a crazy cat, George, named after his father. George was a stray and still insists on spending much of his time outdoors. Here he is out on his back step. 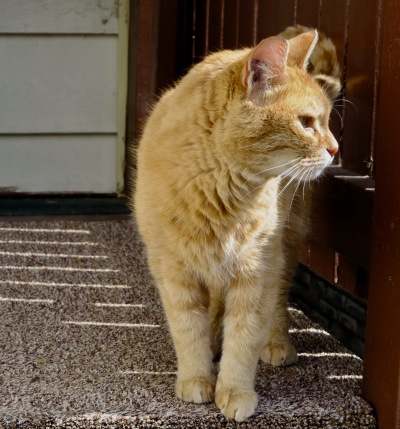 And here he is on a hot day, stretched out sunning himself, in his neighbour’s backyard. 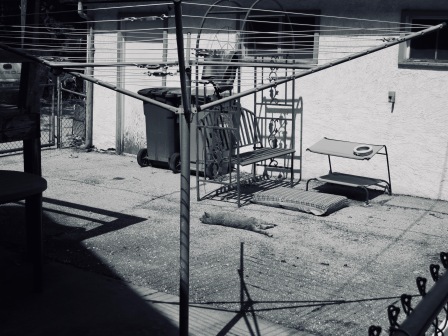 This is a silly shot of Banana, a friend’s fat cat, looking down at me from the stairs.

There are an endless number of other cat photos on my devices, but I’ll stop for now.

I know that all types of animals can make a positive difference in people’s lives, especially the elderly, and cats are a little easier to look after than dogs. So, yay for cats…okay…and dogs, too.